...and 10 Things About the Battle of the Wilderness 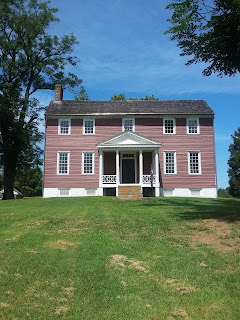 I got it into my head yesterday to head down to the Wilderness today. You see, I'm writing a story right now (hereafter called "Novella #2") that takes place during the days just before, during, and after the battle. I've been to the Wilderness before. It's an okay battlefield, with a kind-of-okay driving tour (it's not Gettysburg--sorry, Wilderness). The landscape is very different than during the battle, and there's a lot of development. BUT the story of the battle--its importance in the course of the war and the nightmare conditions--really interested me. In particular, it was #1 below that stoked an idea for a novella, and it was that novella that led me back there today. And that trip has led me to write this post here:

1. The Wilderness burned. "At some points the timber used in the earthworks was fired, and our men had to stand back out of the line of flame and shoot through it at the Confederates, who were fighting in front of the works. And the woods, through which we had fallen back, were set on fire, and many wounded soldiers were burned to death. . . "

"The wounded soldiers lay scattered among the trees. They groaned piteously. . . [They] were haunted with the dread of fire. . . . I saw one man, both of whose legs were broken, lying on the ground with his cocked rifle by his side and his ramrod in his hand, and his eyes set on the front. I knew he meant to kill himself in case of fire--knew it as surely as if I could read his thoughts."

That's a pretty chilling account of one of the most horrific aspects of the Battle of the Wilderness (Recollections of a Private Soldier in the Army of the Potomac by Frank Wilkeson). The woods were thick and overgrown (see #5), and with all the guns and artillery going off (with the use of, you know, sparks), it caught fire. It hindered troop movements, but more importantly it immolated some of the wounded men who couldn't move out of the way and who weren't fortunate enough to have someone help them. This aspect of the battle is probably the most nightmarish thing you can imagine--and it's part of the reason I began plotting Novella #2. 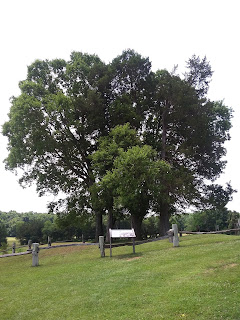 2. Some Southerners loved Stonewall Jackson more than they loved their own family*. In the kooky world of Confederate identity, Stonewall Jackson was probably second only to Robert E. Lee. He outfoxed the Northerners at almost every turn and became a venerated figure. There's even a Stonewall Jackson shrine outside Fredericksburg.

At The Wilderness battlefield, behind Ellwood House, you'll find Stonewall Jackson's . . . arm. Or at least a marker where his arm was buried. See, in May of 1863, the Battle of Chancellorsville took place literally just down the road (see #7), and Jackson was wounded by friendly fire (see #10). His arm was amputated, and his chaplain (Beverly Tucker Lacy) took the arm to bury it in the family plot at his brother's nearby home, called Ellwood. 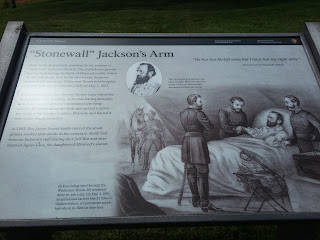 Maybe there are no other markers because they were taken by Federals when they used the place as headquarters, and maybe there are no markers because, as a family plot, everyone knew where everyone was buried (not something that seems to be the case with other family plots). It seems a lot more likely to me that Stonewall Jackson was the only one buried there who merited commemoration, whether that meant erecting a stone in his [arm's] honor even though the rest of the family markers had gone missing, or putting up a stone marker even though they hadn't bothered to do so for Aunt Sue and Uncle Bob. I personally think it's an indication of the kind of reverence that has been felt for figures such as Jackson, who represented a moment of bygone hope (delusion?) and promise for their vision of the future. (For the record, the marker was erected in 1903, when the Lost Cause was very strong.) 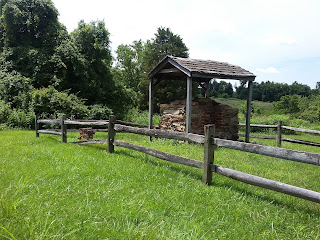 3. The Wilderness was a tavern . . . Well, the Wilderness was an area of second-growth forest, really, but there was a Wilderness Tavern, near what is now Virginia Route 3 and Constitution Highway. (At the time, the roads were oriented slightly differently, and it was on the Orange Turnpike near the intersection with the Germanna Planck Road.) As my guide explained, the tavern was a bit like a truck stop. Places to stop and eat, sleep, buy necessities, rest your horse, etc., were far and few in between, especially in the 18th and early 19th centuries. This was one of the places along the road you could stop to refresh yourself. 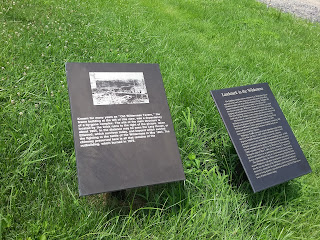 4. ...which is currently under a highway. Yeah, it's sad, but whatever is left of the Wilderness tavern is now beneath Virginia Route 3. According to my guide, that road was built in the '30's or '40's, and apparently they didn't give a damn about the remains of an important, centuries-old tavern that witnessed the battle that raged right on that spot in 1864. What IS left is the ruins of one of the dependencies (outbuildings), right on the side of the highway. A photo from 1865 on the historical marker shows the tavern in ruins--battle isn't kind to structures that get in the way. The dependency burned in the 1970's, which is why there's only a chimney left.

5. What you see now isn't what they saw then . . . I mean this in terms of the landscape. As you tour the battlefield, you'll notice that a lot of the farmhouses are gone. But you'll also be (rightly) reminded by the markers and the guides that the forest you see wasn't there in 1864 during the battle. My guide noted that Virginia was much more sparsely wooded at the time than it is now; most the forests you see today date to after the Civil War. It was mostly cultivated land. The Wilderness had been timbered some 20 years earlier, according to text at Ellwood, and the result was dense, tangled, second-growth forest. That's the mess that caught fire. Today, my guide explained, there are quite a lot of non-native plant species, as well; so in addition to being more wooded and less open, the vegetation you do see differs from what tangled, sparse vegetation was there in 1864. The photo I mention above showing the ruins of the tavern also shows a wide open, treeless landscape in the background. 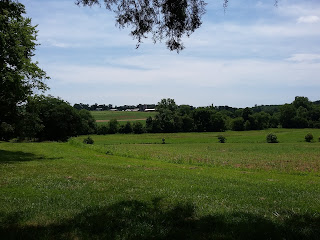 6. ...and it isn't very good farmland. If you look at the soil in the area, it's pretty red and clayey. The terrain is also pretty damp and boggy, so not very good for planting. A lot of the soil in the region had been exhausted by tobacco farming. Ellwood grew crops like wheat and corn which weren't exactly cash crops. The family actually owned a plantation in Louisiana, as well, which was where the real money came from.

7. There were a lot of battles very nearby. The entire swath of land between Richmond and Washington DC saw repeated fighting during the Civil War. Those cities, of course, were the two big prizes, and the armies pushed back and forth, back and forth, often retreading the same ground. The Wilderness is just a few miles from Chancellorsville, where there was a major battle in 1863, and a few more miles from Fredericksburg, the site of another major battle (in 1862). All three battlefields are even part of the same National Park Service unit. They're interconnected in many ways. For example, Stonewall Jackson was wounded during the Battle of Chancellorsville, but he was actually taken to a hospital on the site where the Battle of the Wilderness would be fought two years later.

8. This was the first battle of the Overland Campaign . . . As mentioned, there had been major battles in this area before, and they had not ended well for the Union. Repeated pushes to get to Richmond had failed (miserably). Ulysses S. Grant came east in 1864 to take overall command of the Union Army and immediately headed for Richmond with the Army of the Potomac. The Wilderness was the first battle of the campaign (called the Overland Campaign).

9. ...and it proved Grant's resolve. The battle was a bloody affair and essentially a draw. But unlike his predecessors, Grant didn't quit. He collected himself and his army and pressed on to Spotsylvania Courthouse, where there was another major battle just a few days later. The campaign came to a grinding halt later in the year with the siege of Petersburg, but ended when the siege was broken, Lee fled west, and Grant chased and captured Lee at Appomattox. The important difference was that Grant didn't relent, and he ground down Lee's army, which he understood was a much more important target than Richmond.

10. Friendly fire is a bitch. I mentioned how Stonewall Jackson was hit by friendly fire and died of his wounds during the Battle of Chancellorsville.  But during the Battle of the Wilderness, another Confederate general was hit by friendly fire: James Longstreet. With Jackson's death, Longstreet was probably the second man in the army after Lee, and probably Lee's most trusted man. Longtreet was struck in the neck and was out of commission for a long time. This proved to be a major blow to the Confederate army.

And #11, I guess, is that the Wilderness is an awesome place to visit, and they have some fantastically knowledgeable and helpful people to talk to!
Posted by Elizabeth Huhn at 5:08 PM