There are a lot of reasons to love living in Washington DC. I think most people picture DC as a marble city all-consumed with politics, where everyone runs around in pantsuits. Well, there is some of that. But it's also a city of culture and history. Yesterday, I spent the afternoon in the section of the city that probably conforms most closely to the general vision of the place: Capital Hill. But it's also a section of town that epitomizes the cultural and historical core of DC, too.

I started at the Jefferson Building of the Library of Congress, which is directly across from the Capitol. This is the main building of the expansive LoC complex. The Jefferson Building has a beautiful great hall, which is all white marble and gold accents, more or less just as you imagine. This is where tourists congregate. There's much more beyond that, though. I have a readers card (which, by the way, anyone can sign up to get), and I've gone behind the scenes, around the back, to where the work is done. The LoC isn't just a cool building, it's an amazing resource for all citizens. And it's not just books: the LoC has paintings, photos, maps, audio and video recordings, and artifacts of all descriptions.

On display right now is an exhibit called "America Reads". As a writer, it's an exhibit after my own heart, because many of the highlighted books have inspired me or are important to me in some way as a writer. Here's a selection:

I should note before moving on that the LoC has constant exhibits, and they're always worth seeing. I also took a look at a small exhibit of World War I artwork, some of it propagandistic, some of it representing the horrors of the war.

My second stop for the afternoon was the Folger Shakespeare Library. It's right behind the LoC, and it is, as its name suggests, dedicated to Shakespeare. There is also a theater attached. It's an indoor theater, but it's mocked up to be somewhat Elizabethan (I recently saw Julius Caesar there). The Folger, like the LoC, has a beautiful great hall, where they currently have an exhibit called "Will & Jane: Shakespeare, Austen, and the Cult of Celebrity". Here are a few images:


Now, I want to talk about this last one just a bit. It probably seems a bit perplexing. Charlotte who, you might say? Porcelain figurine why? We care because what?

Okay, okay, so it all has to do with me and my writing, so I'm going to be selfish and self-indulgent. You see, one of my manuscripts, The Cotton Wars, is set in a theater c. 1830. Obviously, I needed to do some research, and my main "point of entry" into the time and place was Charlotte Cushman. Shakespearean actors like Edmund Keane may be (relatively) better-known than Charlotte Cushman, but she was a celebrity in her day. I read a biography written about her by a lady friend. From her story, I got a bevy of details about how early 19th-century theater worked. (By the way, another "point of entry" was Fanny Kemble.) I also plucked just a bit from her life story: Charlotte was an opera singer until she and her handlers mismanaged her and she lost her voice. She became a (very successful) stage actress, known for her takes on Shakespeare. That was another thing that interested me about her, because I love Shakespeare myself and I knew that Shakespeare plays would be a very important motif in The Cotton Wars.

So, it was a small surprise to see this little figurine and realize that it represented an obscure actress I actually knew quite a lot about.

Anyhow, on my way back to the nearest Metro, I snapped a photo of the Capitol: 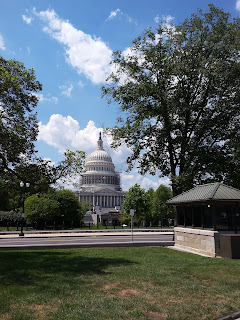 It's looking pretty spiffy, with the Dome newly refurbished and the scaffolding finally coming down. If you don't know anything about the history of the dome, then I suggest you read this Wikipedia entry. This is the dome that was built as the Civil War raged. It stood, half-finished, behind Abraham Lincoln during his First Inaugural Address as war loomed on the horizon, and it stood behind him, finished, during his Second Inaugural Address as the war reached its end.

And here, because they're lovely, are some photos of the fountain out front of the Library of Congress: 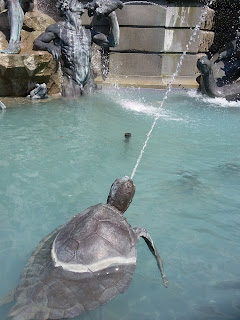 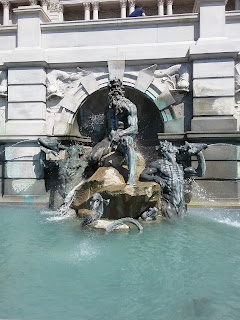 Posted by Elizabeth Huhn at 3:20 PM