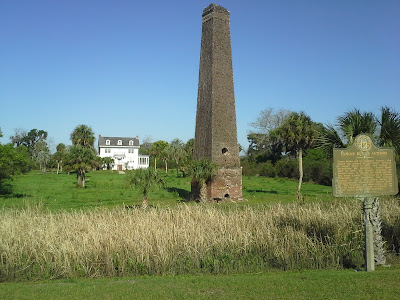 Two years ago, in a twist of irony that seemed to portend imminent glory for me, I booked a trip to Savannah while waiting to hear a response from a potential agent who had a manuscript of mine set (partly) on the Sea Islands of Georgia in the 1850's. Just a few days before I left on my trip, I got The Call. I was officially represented by a literary agent, and I was off to visit the setting of my story, because I'd decided to rent a car and drive from Savannah to Butler Island, just south of Darien, GA.

Now, here I have a post all about that trip and my foray to nearby Hofwyl-Broadfield Plantation. It was a magical trip. I loved it. Fast forward one year, and I got restless and decided to travel to another Southern city, this time Charleston. It's a further drive from Charleston to Butler Island, but I rented a car and drove there again because, well, I felt obliged. I blogged about meeting an alligator there. Fast forward one more year to, well, last week, and I was again in Savannah and Charleston. This time I drove down from my home in Virginia (a good idea in some ways, a bad one in other ways), and of course made it all the way to Butler Island, for the third time.

This time, because I drove, I was able to bring proper hiking shoes and a backpack, so I was better-prepared to hike the island a bit. 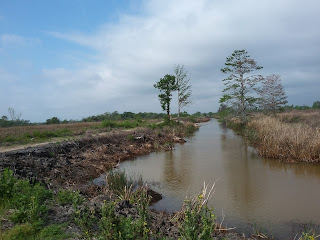 But let me back up. What does Butler Island have to do with my manuscript?

Well, as I've explained elsewhere, the seed that turned into "Channing" was the memoir of a young Englishwoman named Fanny Kemble, who married a slave-owner from Georgia in the 1830's. Apparently, going into the marriage, she wasn't aware that he was a slave-owner. There are two mitigating factors here: first, in that time, even a prospective bride wouldn't think it her place to ask a man where his money came from and, second, she met Pierce Butler in Philadelphia and the family lived in Pennsylvania, so she didn't necessarily have reason to think that their wealth came from a Sea Islands rice plantation. Fanny visited the plantation in the early 1830's and wrote a memoir, which actually wasn't published until much later, after she'd scandalously divorced Pierce Butler. Not long before the Civil War, Butler actually ended up in financial trouble and had to sell off hundreds of slaves in an enormous auction. It was called "The Weeping Time." 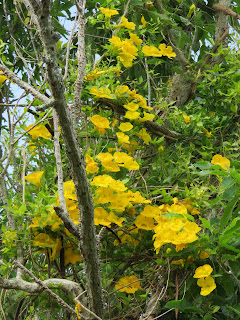 I used the image of the red-brick chimney sticking up into a clear blue sky in "Channing", as well as the imagery of the low-lying, boggy land, where the difference between land and water are slight. I even put an alligator--or the possibility of one--into "Channing": two of the girls blithely traipse off in search of one. For the record, the one I saw last year was smallish, not a man-eater. Still, I don't suggest anyone go looking for a gator, because even the small ones might like to chomp on your hand or foot. (Seriously, there are signs all over telling people not to approach the gators. I'm sorry, but if someone purposefully approaches a gator with the intention to, I dunno, pet it, then they might just deserve to lose a finger!).

Determined to make a real go of seeing all of Butler Island this time, I drove to the I-95 overpass. Yes, sadly, I-95 cuts directly across Butler Island. I don't think its construction really destroyed anything--it passes over a narrow isthmus of land, and it was just fields there. Still, it's a bit distracting even though there's no get-off. You have to take the next exit and come round, then rattle a mile or so down a dirt/sand road. At the overpass, that road comes to end. That's where I stopped, put on my hiking shoes, put on my backpack, and got going. Wary of gators, I picked up a random hook about the size of my hand that I found, thinking that if nothing else I could poke the bugger in the eye if a gator tried to attack me. I was, maybe, more worried than necessary about that as I walked down
a road heading roughly south, paralleling the highway. On either side was that watery, swampy, gray-blue-green-brown mix so typical of the area. The road was higher ground, and clearly some kind of vehicles sometimes used it. Still, I was wary. And maybe that's why, when I reached a bend, I said, "Alright, enough adventure for today," and turned around. I congratulated myself on getting so far. I had gone west the last two times, and I was sure I'd gone further this time than those two times. As it happens, I was wrong. BUT, I saw new parts of the island, which I'm grateful for. 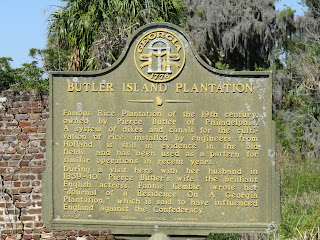 It's a lovely feeling, to connect with a place like that. In the world of Google Earth, we can see and understand so much about places we've never been to. We can almost experience for themselves. But "almost" is the operative word here. I'd written Channing before I ever visited Butler Island, and I had built a strong image of the place in my mind and (I think) in my manuscript, an image that was largely confirmed by my visit there. And yet, being there was so much richer and fuller. The smells, the plants, the insects, the intensity of the sun, the emphatic vividness of the colors--it was similar to what I'd imagined, but not the same.

Which makes me think: what can we really know of the past? We can't see the places they inhabited, not really. Even preserved houses are no longer the living, breathing places they once were, and the setting around them will have changed dramatically. The light, the sounds, the things you see out those windowpanes--all of it will be fundamentally different. Oh, we can put together images in our minds--we can have a very good idea of what a place was like, in fact. But it won't be the same, will it? I guess that's true in a larger sense, too. We can't recapture the past. It's . . . . passed. And our memories can reconstruct it, but it will never be quite the same.

Posted by Elizabeth Huhn at 5:51 PM