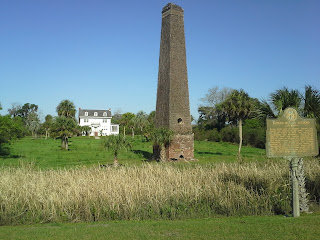 These are the ruins of the steam-powered rice mill at Butler Plantation, on Butler Island, just south of Darien, Georgia. It's on the Altamaha River and is part of the Sea Islands of Georgia. [The house is actually a later addition--the original house is gone.]

And it appears to be in the path of the impending wrath of Hurricane Irma, one of the most powerful hurricanes to ever make landfall. It probably won't be a direct hit; the storm will probably spend itself over the length of Florida (poor Florida!), after having left a wake of destruction across the Caribbean. But this is personal, and I do worry about what's left of Butler Plantation. I just hope that that chimney still stands. There's a national trend of removing anything that might remind us of the slave-holding past, but these things are very important. It's personal for me, because it's essentially the setting of two novels I've written. [For more about Butler Island, have a look-see here.]

So I'm going to cross my fingers, hold my breath, and hope for the best for Butler Island . . .

Posted by Elizabeth Huhn at 6:51 AM