[Programming note: At the beginning of this month (September 2018), I took a six-day trip to the U.K. I was on a mission. Yes, I was going for pleasure, but I was going to see specific things for specific reasons: places that I didn't get to see on my previous stays in the UK, places that have a particular connection to my own writing or things I'm particularly interested in (mostly, this is encompassed by four works: Jane Eyre, Alice in Wonderland, Peter Pan, and Harry Potter). I started in London, then went north, to Edinburgh and made my way back to London via Haltwhistle (to see Hadrian's Wall), Haworth (to see the Bronte parsonage), and Oxford. I'll be writing a blog post for each day.]

My last day in the U.K. was a half-day, of sorts. I didn't have to be to the airport until about 2:30 for my 5:10 flight. I had the morning and a little bit of the afternoon to do one last major thing (and one smaller thing). In hindsight, maybe it wasn't the best idea to leave this one until the end. After five days of intense travel, lots of mental stress, not-great food, and excitement, I was one tired girl. And my last big stop was meant to be a pretty important highlight.

This stop was the Imperial War Museum. I've mentioned being interested in Peter Pan, of course (see below for more on that; I didn't start my day at the IWM). I was led towards the true story of the five brothers who inspired Peter Pan by my research while writing a story set partly in 1917. The story of the Llewelyn Davies boys was a good "entry point" into the era. (I've done this with other times/places, like using Fanny Kemble as an entry point to the Sea Islands of Georgia, or Charlotte Cushman as an entry point to theater in the 1820s and '30s.) In any case, this story I wrote takes place during the Great War, which is a massive part of the IWM. I always want to see and learn more, and though I have a decent grounding in life during the Great War (don't ask me about military stuff), it's not as thorough as my grounding in the antebellum and Civil War eras. Hence, I had a great desire to see this museum.

But as I said, I was tired, and I was in a bit of a trance as I wandered through. The museum is in an impressive building, with a broad central hall filled with planes and rockets. Beyond that is the WW1 section of the museum, an area partitioned off into section that you wander through on a meandering path. The lights are fairly low and moody, and there are nooks and islands with displays and interactive areas and video screens. Maybe it was the tiredness, but it all felt a little shallow and gimmicky, and disjointed. I couldn't see a theme to the different areas, or any logical progression from one to the next. It wasn't chronological or thematic. And instead of just presenting the information in written form, it had to be delivered using sliding panels, or buttons you had to press or levers you had to pull, or through a video. I'm sure this is engaging to some people, but I found it a bit trying at times.

That's not to say there weren't some wonderful objects to see. There was rusty barbed wire and gas canisters and lots of uniforms from some of the many nations who were part of the war. My favorite thing, perhaps, was the display of buttons that were worn by war workers to show that they were contributing even though they weren't soldiers. Women would often give white feathers to men who weren't in uniform and call them cowards for not enlisting--the pins were a way of showing that they, too, were doing their part.

But I should back up, I think. Back to Peter Pan. Before heading off to the IWM, I decided to go visit the place where J.M. Barrie's longtime residence once stood. I previously posted pictures of his place off Kensington Gardens. He moved from there before the boys' parents died, I believe, to a place on The Strand near Charing Cross called Adelphi Terrace. He had a large flat on an upper level with a great view of the river and an enormous ingle that he would sit in. It was at Adelphi Terrace that Nico and Michael spent their later childhoods, after their parents died and Barrie became their guardian. Sadly, that building is gone, replaced, it would seem, by an art deco-ish monstrosity. But there *is* a blue plaque letting us know Barrie (and some others) lived there once.

From there, I decided to walk to the IWM. On my way, I passed Trafalgar Square (they were setting up for a bicycle race), and walked down Whitehall, past the Cenotaph and lots of memorials, to Westminster. I stopped by the statue of Abraham Lincoln, took a picture of Westminster Abbey, and was a little sad to see that Big Ben was literally under wraps. As I crossed Westminster Bridge, I took a selfie with the London Eye, and I really like the picture because I'm so clearly having fun.

In any case, I then did the IWM as mentioned above. When I was all out of steam, I headed back to my hotel across the street to pick up my bag (it took them a while to find it in the luggage room), then walked to the Tube and took it to Heathrow (easy as pie). I was at Terminal 5, and I have to say, though it's new I wasn't impressed. First of all, the signage to the gates wasn't good. Second, there were tons of places to buy high-end fashion and expensive jewelry, but nowhere to get some effing food, and I was hungry. Third, why on earth are the bathrooms always around three corners and through two doors? It doesn't have to be this way, British people. Third, though checking in was actually pretty painless, it was set up in such a way as to be confusing. I was supposed to be in, like, zone 1 area 2 or something, and the layout just made it unclear where I was meant to go next to drop off my bag. It was just a big area with a bunch of barriers and things, with no real direction of where to go and what things were. Fourth, to get to my gate from the main waiting area, I had to go down an escalator, board a shuttle, go down another escalator, and then go back up yet another escalator. This is a *new* building, mind you. It doesn't have to be this way, British people! Why make it so complicated? Why? Fifth, while a whole plane-full of people and I were waiting in line to board, passes in hand, we were all brought to a sudden halt by a lady who'd missed an earlier flight. For at least ten minutes, the lady at the gate was tapping at the computer and the passenger was asking whether she'd get business class and a window seat and so forth. Meanwhile, there are fifty people in line. Oh, and there's a separate line for first class, and somebody is there with nothing else to do but check in those people as they wandered up (there was no line). So they were there idly waiting for first-class passengers, while us scummy"economy" folks who *only* paid $750 just had to wait. Because eff us, I guess.

I did get on the flight just fine, and we lifted off, and away I went, back home to the good old US of A. I had an absolute blast on my U.K. adventure and saw and did so much, but at that point I really, really just wanted my own bed and a long stretch of calm and quiet. 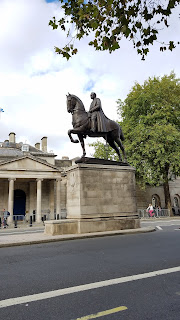 Posted by Elizabeth Huhn at 6:53 PM