I shared the journey of sewing myself a period-correct 1860's dress in my previous post, along with some photos taken on my phone (because of course that's how I took the pictures). Somewhere in the middle of sewing my dress, I was listening to an Abraham Lincoln-themed podcast (what? don't you listen to Lincoln podcasts for funsies? why DON'T you?). One of the hosts was talking about her trip to Gettysburg for Remembrance Day weekend (hey, I was there, too!), and she mentioned going to a place called The Victorian Photography Studio, where she got dressed up and had a photograph taken using the wet-plate processes available in the 1860's. My little ears perked up. Period photography, did you say? Why, I have just the outfit for that! Or I will, once I finish sewing it.

So, once I had finished sewing it, I set up an appointment, which was for Saturday. I drove up to Gettysburg to the Studio, which is near the cemetery. I was a little early, but it was probably a good thing. I filled out my information downstairs (it's in an old house; the downstairs has some old-fashioned-looking chairs and blue and gray uniform jackets and a mannequin with a paletot, and a lace-draped table with books about photography) and was taken upstairs. I got dressed in the dressing room, which took me, oh, fifteen or twenty minutes (including doing my hair, which probably took longer than dressing). Then I went out into the studio.

The studio is well-lit with a skylight, but there are also some electric lights (in case it's a cloudy day, I guess). My photographer asked whether I would like to sit or stand (stand) and whether I could like to pose beside a chair (yes). He asked about props, and I settled on a black fan, to contrast with my white dress and match my dark trimmings. The photographer positioned me beside the chair and had me lay my hand on it (it was actually my right hand, though it looks flipped in the photo). He talked me through the process of preparing the plate: It's already coated with something (I have this in my research notes since I've research photography, but I would have to dig it out), and it needed to be washed in collodion to make it light-sensitive. It was placed in a wooden case(ugh, I can't remember the proper terms!) and then into the camera.

Here, try this for a much better explanation of the process: https://www.britannica.com/technology/wet-collodion-process.

Anyway, once the cap was off the lens, the plate was exposed to the light, and the photograph was being taken. The exposure was for 13 seconds. My photographer explained that on cloudier days, the exposure is longer, and that if he had taken it outside, he wouldn't have exposed it for more than 6 seconds. I, in the meantime, had to hold still. I could breathe and blink, but not move my face. I was going for pleasant but not smiley. I think I accomplished that, though I am a little cross-eyed in the picture, haha!

In any case, once the exposure time was over, the plate was removed to the dark room, where it was fixed. My photographer brought it out in its little bath of chemicals. It was still a negative, because what you get when you first take wet-plate photos is a negative image. In order to make it a positive image, it has to go into a potassium cyanide bath. As you watch, like magic, the negative image almost dissolves into a positive image. This is some pretty nifty chemistry, and honestly it's the sort of thing that they should show kids in school, because it's immediate and really nifty. I took a video:

And below is the lovely result. It is, of course, in black and white, but it's hard to capture the silvery quality to the image. It's really a beautiful object in itself. 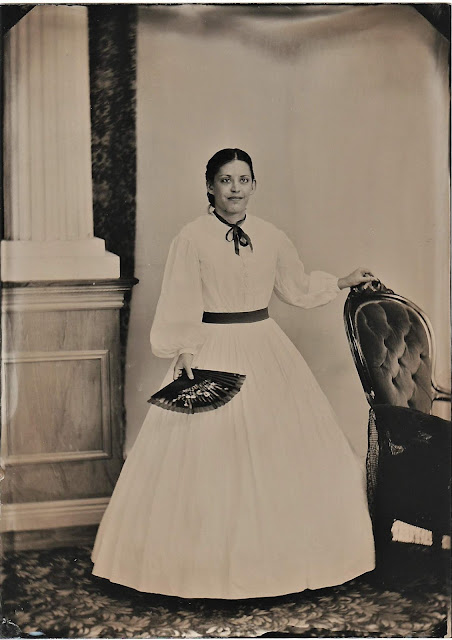 Posted by Elizabeth Huhn at 5:32 AM