Several weeks ago, I wrote about some research rabbit holes I was wandering down. Since then, two things have happened:

1. I finished the MS in question, about the Llewelyn Davies brothers, who inspired Peter Pan (I'm calling it Proud and Insolent Youth for now), and,

2. I finally got in the mail the print I had been waiting for.

The first one probably deserves its own post, but I wanted to talk about the second one. Just to get it out there up front, here is a picture of the print of the floor plan: 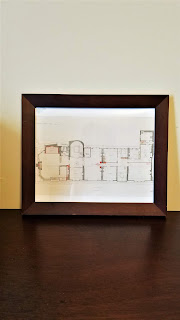 I ordered this at the beginning of July from architecture.com. I had been blundering around Google and found that they had a print available of the renovations to JM Barrie's flat at Adelphi Terrace in London. This was interesting to me because it showed the exact layout of the flat, so I could picture the place. I already knew quite a bit from photographs of the interior, of course. Now, why did I want to know about the interior of JM Barrie's flat? Because, from 1918, the subjects of my work in progress (it was still in progress at that time) lived there. At least, two of them (Michael and Nico) did. It therefore played a pretty large role in their lives. Ergo, I wanted to know as much as possible about it.

I was getting up to the point in my WIP where the boys move into the flat with Barrie, and the print was still in the mail. I really wanted to see what the different rooms were, because I wanted to describe the place as the boys move in. Also of note, this floor plan was made by the architect when renovations were made to the flat in anticipation of the boys' arrival. The changes being made could certainly tell me a lot, and be fodder for a paragraph or two. So I was anxious to get the print so I could get on with that bit of the WIP.

But it didn't come and it didn't come. Nearly a month passed, and I was getting concerned. Granted, it was coming from England, but ships under sail made the journey in less than a month. At the one-month mark, I contacted them. I was passed along (via email) from person to person, but all these people were responsive and helpful, so I didn't mind that. At last, someone said to wait until Monday the 12th (of August--five and a half weeks after I ordered the thing). If it still hadn't arrived, I should contact them. Oh, and it had gone to Frankfurt, and from there they had no idea where it had gone. Because Frankfurt is on the way to the US from England . . . .

Anyway, I got home from work Monday, ready to email them back, but the package had arrived, and I was stoked. It came in a tube, so I opened the tube and unrolled it in a fit of glee, like a kid on Christmas morning. I stared all dewy-eyed at where the sinks and lifts and bookshelves were marked. Marvelous. And there, yes, was Barrie's famous inglenook, where he would sit and write, and where he hung a picture of George playing cricket and George's cricket hat. And there were four bedrooms, though who slept where I couldn't know. I had to guess.

I had the material I needed for the few paragraphs about the flat, but I had moved on in the meantime. I'd made a vague stab at it but mostly left it blank, so I went back and filled it in. I talked about coming out of the lift and entering the doors to the flat itself, about the dining room and study and the bedrooms. Here was where I had to guess about who took which room, and I apparently got it wrong. I had Barrie in the back room near the kitchens, which was apparently the spare room, and I had Michael and Nico's rooms switched. (I still need to fix that.)

How, you might ask, did I find out that I was wrong?

Well, there is a treasure trove online at jmbarrie.co.uk. In addition to scores of wonderful photographs of the family and Barrie, there are audio interviews conducted by Andrew Birkin, the heroic biographer of Barrie and the Ll. Davies boys. In the '70s, he sat down with Nico, the youngest of the boys and the longest-surviving, as well as Jack's widow, Gerrie, and a few others who had known Barrie and were still alive. The key was this clip, which is Nico describing a house guest they once had (it's an amusing story) and giving a quick verbal tour of the flat. You enter, and the study was to the right, Barrie's bedroom was directly ahead, the dining room was to the left, then there was a hall with Nico's bedroom to the right and Michael's to the left, then the spare bedroom. (He doesn't mention the kitchen, which was a bit further on; presumably, he didn't spend much time cooking, as they had several servants.)

So, time to revise that little bit of the manuscript.