I started my costuming journey about a year ago, from pretty much zero. It was a steep learning curve, but I'm proud of the work I've done. I think my best work is my lovely tan 1860's dress. I shared a little bit about its construction, and I was able to wear it (to great effect!) to the Historical Novel Society costume party this summer.

But I am greedy, and I wanted more: I wanted some really nice photos to show off my work. I considered going back to the Victorian Photography Studio in Gettysburg to have another tintype done, this time of me in my tan dress [I blogged about it here]. I decided to do something different though: I decided to hire a photographer to take pictures of me out and about in my dress.

First, I had to settle on a photographer. I found Sara Roney online, and it turned out to be a great choice. Spoiler alert: the photos turned out beautifully, and I had a great time getting them taken.

Second, I had to decide where to have the pictures taken. I'm a bit spoiled for choice around here (Northern Virginia). This place is littered with battlefields and old houses. I considered just finding a nice wooded park. I considered Antietam and Gettysburg. I considered Arlington Cemetery and Liberia Plantation. But I settled on the Manassas Battlefield because of the variety of locations we could use, and how close it is (about 40 minutes from me). It's actually a pretty big place, so I had to figure out where exactly to have the pictures taken. There's the Brawner Farm and the Stone Bridge and the Stone House and the houses on Henry Hill. I thought the best place might be the Brawner Farm, so that was where I said we should meet, with thoughts of driving over to the Stone Bridge and Stone House after taking pictures at the Brawner Farm.

The day I was meant to meet the photographer came, and I got ready (hair, underclothes, sweater over top; dress and hoop skirt in the back to be put on once I arrived, since I didn't feel comfortable trying to drive in the hoop skirt) and headed there. I waited, but no photographer. After a while, I gave her a call, and it turned out there had been a mix-up (on her part--but I wasn't really angry). We rescheduled for a few days later and agreed to just meet at the main Visitors Center.

So there was I, all dressed up but with no photographer. I got in the car and started driving, trying to decide what to do next. I didn't want to just go home. Should I go up to Antietam to get pictures of myself? Gettysburg? I actually called the Victorian Photography Studio, but they were booked for an event that day. I thought and I thought as I drove, and then it came to me. Just a few days earlier, I'd gone to a Halloween party at a cemetery in Alexandria. The party had been a bust because it was pouring rain. BUT, it occurred to me that it was a beautiful day that day and that cemetery would be a VERY autumnal and VERY Victorian kind of setting. So I headed over there, put on my dress, and started wandering amongst the headstones, looking for a good place for a picture. I propped up my phone against some gravestones and did some fun posing. I draped myself over a gravestone as if in great despair at the loss of a loved one. I sat against a gravestone's plinth and tossed leaves in the air. I touched the gravestones in a mournful manner. It was all delightfully fun. 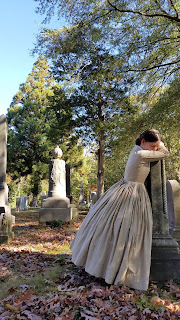 I chuckle every time I look in particular at the picture of me collapsed mournfully against a gravestone. I have loved Huckleberry Finn since I was a little girl, and I couldn't help thinking of Emmeline Grangerford, the teenaged girl who'd written sickly mournful poetry about dead people, drawn over-the-top pictures about death, and then died young herself. Twain is sending up the Victorian fixation on mourning and death, particularly on romantic, picturesque death. Anyway, it's hilarious, and it's what I thought of as I was posing there.

After spending a happy hour and a half or so there, I went home with a smile on my face. So even though the professional photos had been postponed, I felt it all ended well.

Finally, the new date came. We were scheduled for 4:00, so I knocked off work a bit early to get ready and go. Now, the clocks had just been turned back for fall, so the sun was setting early, about 4:45. We had a one-hour session, so we would have to work fast to catch the light. Luckily, it was a beautiful afternoon: clear and cool but not cold, and perfectly comfortable in my dress. But, alas, DC traffic reared its ugly head, and the photographer was late. She didn't get there until about 20 minutes after 4:00. Which meant we were losing light fast.

We got right to work. We met at the Visitors Center there on the battlefield, and we started with an old oak tree just off the parking lot. Looking away from the parking lot, you could see the treeline and the sky with dusk setting in. There was a funny little pine cone basket there, left by who-knows-who. I picked it up and twirled around. I walked through the grass. I spun. I tried to look as if a friend were coming from the other direction. I sat against the tree with a book in my hands. I looked at the camera with a smile (a goofy smile, alas).

We moved along, taking pictures at a snake-rail fence. I stood on the first slat and looked towards the mountains in the distance. I walked beside it, running my hands along it (sort of--it's rough and I didn't want splinters). I walked up and down a path to get pictures of me coming a going. I stood and sat on the porch of the house there on Henry Hill. I pretended to read a book. I posed at a cannon, pretending to light it and then leaning against it.

Then we agreed to walk down to the Stone House on the corner. It was a bit of a hike, and people who don't know a lot about Victorian clothing might think it would be difficult for me to walk that far in a corset and hoop skirt, but it wasn't at all. It was perfectly fine. After all, our foremothers took long rambles all the time in hoop skirts and corsets--and they rode horses and played croquet and baked bread and all manner of things. Taking this walk was as comfortable as doing it in my modern clothes. The corset isn't heavy, and I don't tight-lace, so my breathing isn't at all constricted, and nor is my movement. The skirts are actually a few inches off the ground, so it was fine so long as I didn't get into the tall grass.

Anyway, down at the bottom of the hill is the famous Bull Run with a foot bridge over it. Just beyond it is a major intersection.

Alas, one thing that struck me as we were doing this photo shoot was just how encroached-upon the battlefield is. Manassas is very much a suburb of Washington DC these days. Just at the edge of the battlefield is a community college and a strip mall with a Kohl's, among other things. That's where the exit to I-66 is, as well. A huge volume of traffic rattles right through the battlefield everyday as workers make their way from DC to their suburban homes. That intersection is always very, very busy. It took us quite a while just to cross it because of the lengthy stop-light.

By the time we made it across, it was basically full dark. The light failed quickly, and the temperature began to plummet quickly, as well. We got a number of pictures of me standing in front of the house and coming around the corner. Then we did some fun shots with the flash. In one, I look like I'm dancing on light, and I love it. Last, I took a seat on the front steps and got some pics taken with the flash. If I look really tired in those shots, it's because I was really tired. Happy, but tired.

We walked back up to the Visitors Center--harder to do going up the hill than down. I was getting pretty chilled by this time, and we had to use my phone's light to see the path, but we made it back. I got out of my dress and hoop skirt, and we had to be let out because, uh, the park actually closed at sundown.

So it was a fabulous experience, and my thanks to RONEY FIELD PHOTOGRAPHY for the pics! 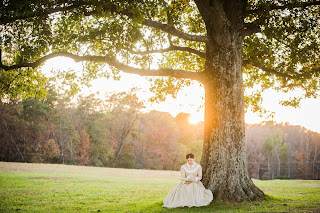 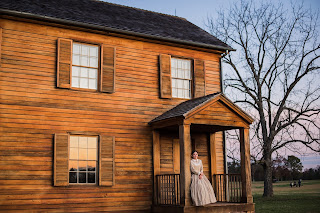 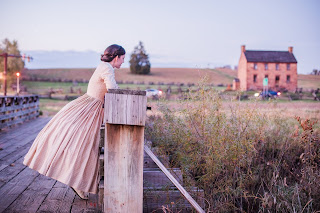 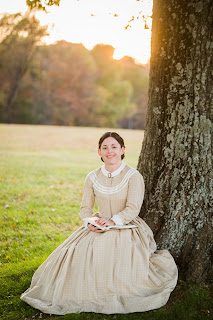 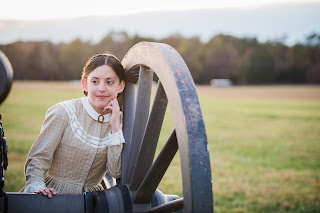 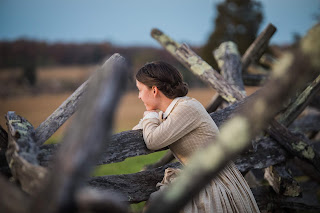 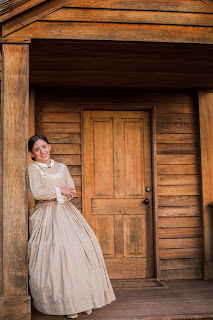 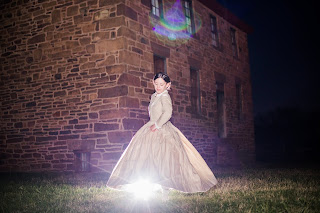 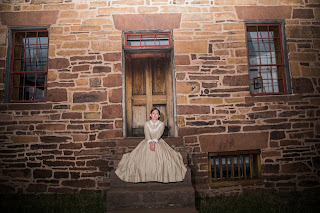 Posted by Elizabeth Huhn at 3:44 PM