...And a Pair of Edwardian Combinations

Materials: white cotton lawn, cotton lace, ribbon (yeah, yeah, cheap polyester ribbon; I don't care), three bone buttons
Pattern: Wearing History 1917 Combinations, plus a good deal of improvisation
Time to complete: about two weeks of off-and-on work.
Cost: including pattern and not including lace and buttons I already had hanging around: about $30-$35

Combinations are Edwardian underwear. They're the first layer and go under the corset and are made of cotton. I say "are" but maybe should say "were", since of course they aren't worn today except by costumers like myself. (I count myself a costumer, by the way.) They are "combinations" because they combine the chemise and drawers of the Victorian era. There are, of course, different styles of combinations. I didn't, until fairly recently, have much design on making myself combinations, and at some point I purchased this pattern from Wearing History with the vague idea that maybe at some point I would think about doing so: 1917 Combinations. Recently, in a flush of creative fervor, I decided to tackle this project. After some consideration, I decided the pattern wasn't quite what I wanted. It's basically a chemise, with the option of adding a tab that comes up between the legs and buttons in front.

Okay, I don't have the skill to make something quite so frilly and lacy. But I thought about it and figured I could jury-rig something with the same basic shape. I could start with the pattern above, which gave me the basic shape I wanted on top. I just needed to figure a way to make a skirt into a pair of open drawers (which is what we have above). To help me out, I used the pattern for a pair of Victorian drawers that I had made and really liked. Looking at the pattern pieces helped me visualize how to make the shapes work. 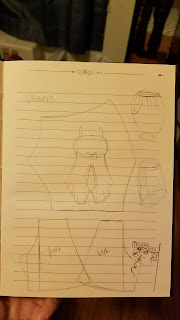 I started with the 1917 Combinations pattern, cutting out the two simple pieces for front and back, sewing them together, sewing on the lace, and creating and adding straps. (The straps took forever, by the way! I created a narrow tube of my fabric and then had to turn it inside-out so the seam was on the inside, and that legit took an hour; then I had to press it flat, which took some time. It took half a day just to do that straps, and I hadn't bargained on that.)

The basic plan I came up with to alter this chemise-combinations thing was simple: slit the skirt at the center front and center back and add two strips connecting the front and back to go between the legs. I would therefore have two legs to step through and, well, an open crotch (this was how drawers were made in the Victorian and Edwardian age; and you better believe that I always wear modern underpants underneath when wearing split drawers). Because your back is longer than your front (due to, you know, your butt), the slit in the back would need to be longer than in the front. The fabric between the front and back would need to be straight along the bottom and curved along the top. Hence I came up with this shape, which I just free-handed: 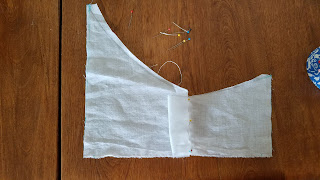 You'll see that I shortened the width of this piece. I had pinned it in place and realized it sagged, which was weird, so I pinched it, pinned it, and sewed it in place; you can see the resulting seam there in the middle. Once I did that, I was happy with the shape and with the height of the slit in the front and back. It wasn't too high up in the front of too low in the back.

Next, I made a copy of this shape so I had one for each leg, then sewed them in place. I made it a wide, 1/2" seam because narrow little seams drive me nutters. The problem with that was the top of the slits I had cut. I now had a 1" wide gap, because of the 1/2" seam allowance at the top of each attached leg piece. So I added a placket (I suppose that's what you call it) to the right side of the cloth just above this gap, sewed a line just to either side of the center, then snipped along that center line. Then I could push through that placket from the right side to the wrong side of the garment, which left me with a nice finished edge on the right side of the garment.

I tried it on after all this and found that it looked good, except that there was a wee gap in the crotch-ular area that just wouldn't do at all. So I really quickly cut out a triangular patch and sewed it into place. Ta-da, problem solved! 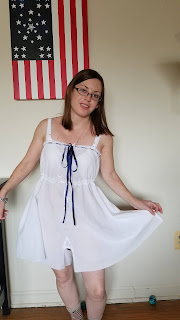 Next, I switched out the blue ribbon at the neckline and waist with the same pale pink ribbon, rather than blue on top and white at the waist. This was straightforward: I just sewed the very ends of the ribbon together; as I pulled the old ribbon through the holes, it carried the new ribbon with it. I also secured the ends of the lace (though not the ribbon, which I used to tie the combinations closed) by hand-stitching them (machine-sewing wasn't quite precise enough for to finish it off, though I used it to do the bulk of the stitching).

Next, I wanted to add an opening to the center front at the top. This is a common aspect of combinations, and I like the look. I had to think pretty hard about how to create the placket and where to place it. It's too complicated for me to explain here, but suffice it to say that I did something similar to what I did above with the edge of the slits for the legs. One side of the placket I created was twice as wide as the other so that I could fold it over itself to create a sturdy base for buttons. The other side I folded back against the garment so it was, also, double-thickness to take buttonholes. I realized as I was doing this that I would have to unpick some of the hand-sewing I had done to the lace, because the slit for this placket would have to be off-center for reasons of geometry and math. So I unpicked that, then sewed the placket in place, put on the buttons (some bone buttons I had lying about), made buttonholes, and voila! Center-front opening!

The next step was to sew that lace back in place, then secure the ribbon on both sides of the opening. By securing the ribbon in place at the right length for my particular measurements, I wouldn't have to pulled the ribbon and tie it closed every time; I would just button it. (The waist I still pull tight and tie off; I step into the combinations, so it has to go over my hips.) I did leave some ribbon so I could tie a bow, just for the sake of having a bow rather than for the purpose of closing up the combinations.

The only step left was to add a ruffle along the bottom.

That was a fairly simple matter of cutting out a strip of my cotton lawn fabric about 3.5" wide. In retrospect, I wish I'd made it wider, or made two ruffles, but what I did works. In any case, I actually cut out three strips at 3.5" wide: two were the width of the fabric, and one was half the width of the fabric (which was 60"). I then sewed together those long strips and hemmed that new, very long strip (150") with a tiny hem. I cut the length in half so I had a strip for each leg. Then I ran two gathering stitches across the top, pausing at the halfway point of each strip. This way I wouldn't be gathering the whole length for each leg at once but rather one-half at a time. With that done, I sewed together the ends of both strips so I had two long loops. I pinned the top of the strips (the edge with the gathering stitches that ran from the seam to the midpoint of the circle) to the bottom of the legs: I pinned it at the side seam and the inside of the leg, then pulled the ends of my gathering threads until my ruffle was gathered to the right length. This sounds simple, but it took forever, and even so my ruffles aren't as even like I want them to be. I really just don't have the knack for making pretty gathers. You're supposed to stroke them, and I stroked them for all I was worth (wow, that sounds really dirty). Still, it turned out well enough; they look like ruffles, and gosh darn it, they are ruffles. So I'm satisfied.

And with that, the only thing left to do is to finish off the seams on the inside, which is too boring to chronicle here. But it will be done.

Overall, I'm extremely pleased with how this turned out, especially since I was pretty much making it up as I went along. It still reads more as a chemise and less as a pair of split-drawer combinations than I would like, but it's cute, and I'm pleased with it.

Next up: a corset! Now THAT will be an adventure.