So, it looks as though this project will span only two full weeks, which is nice. I should note that a lot of thought and planning took place before the actual work began.

If you want a full intro of the project, including the supplies I used and the cost, see my post about week 1. But just to summarize, I decided to make a mid-1910s corset, a "Great War" corset. The pattern is the Rilla corset from Scroop. It was a fabulous pattern to work with, so if you want to make yourself such a corset, this is the pattern to choose.

Now, in my last blog post I talked about some fitting issues. What I decided in the end was to add 3/8" to each edge of each panel at the bottom, to give more room for my hips. I did not create new pattern pieces because I figured it would be something of a waste of time. Instead of retracing and redrawing all the lines I'd used with the original pattern pieces, then adding the extra 3/8" and redrawing, then tracing that onto my fabric twice . . . well, instead of all that I just used the same pattern pieces, traced them directly onto the fabric, added the 3/8" right there, free-handed the new lines, and cut out those pieces. By "those pieces", I mean the pieces for the right side of the corset. I then flipped those pieces over and traced them onto the fabric so I had the panels for the left side of the corset. This way I was more sure to have very symmetrical panels, and I wasn't tracing and retracing and tracing and retracing.

I should also note that, per my fitting of the mock-up, I removed 2" from the bottom of every piece because the mock-up was too long. This meant that instead of having to fit the pieces onto my fabric like jigsaw pieces, I was able to line them up right next to one another and even had a bit of fabric left over. That would come in handy later...

You might think this took, oh, maybe two or three hours. NOPE. This was approximately a day-and-a-half worth of work. First, there was quite a bit of tracing, measuring, and free-handing of lines. After all, I had to completely redraw eight lines, then trace them for the opposite side of the corset and refine them so they were pretty and smooth. I also carefully drew lines 1.5 cm in from the edge to guide me in sewing the seams. (I don't ever use centimeters, but the pattern said the seam allowance was 1.5 cm and that using the measurement in inches would be less precise.) So that meant even more careful lines. There were also matching-points so all the panels met up properly at the seams, marks for the boning, and marks for the waist stay. Multiply this by 10 panels, and you might see why it took me a while. I'm admittedly a bit slow.

Anyway, here is the first side of the corset, cut out of the fabric: 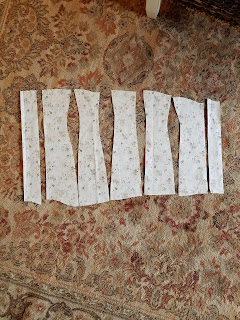 As mentioned, I used these as pattern pieces for the left side. And also as mentioned, I added lines for where the seam should be. There I hit a problem. I started cutting, and instead of cutting along the cutting line, I cut along the seam line. There was much cursing. I couldn't scoot the piece left and redraw/recut, because it was at the edge of the fabric. I couldn't scoot it right because there was the next pattern piece (and the next one and the next one, all lines up in a row). Thankfully, because I took 2" off the bottom of every piece and was able to rearrange my placement of the pattern pieces on the fabric, I had some space left over, so I was able to redraw the shape there. I was supremely annoyed to have to go through that whole process of tracing and refining and adding all the necessary marks again, but I did.

In the end, this is all that was left of my fabric, so not much room for error: 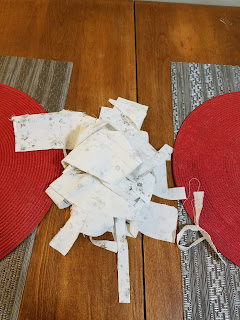 With everything now prepared, it was pretty much all downhill from there. Before sewing all the panels together, I had to prepare the front and back panels with the closures. In the front, that meant the busk. In the back, that meant eyelets for the lacing.

First came the busk. In the picture below, you see the loop side inserted and the knob side sitting beside it. To insert the loop side, I carefully placed the busk (according to the pattern) and marked where the loops should poke out. As I sewed on the facing (which you can't see here, of course, because it's turned under and is on the other side of the fabric), I sewed a seam from the top of the panel down to where the first loop pokes out, sunk the needle, spun the fabric around, and sewed back up to the top in order to make a really strong seam. I did the same thing for the space between the first and second, second and third, and third and fourth loops (from there down I just sewed a straight seam). I now had gaps in the seam to poke my loops through, which I proceeded to do. I then hand-sewed the busk in place along its edges. I probably could've done it by machine if I had a zipper foot, but I don't have a zipper foot and, anyway, this is much more precise.$$$$$$$$$$$$$$$ 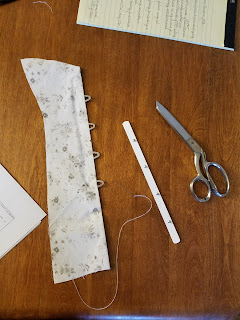 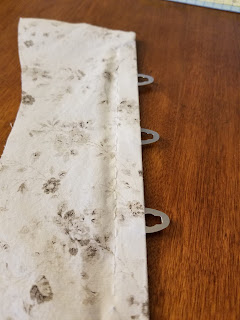 The other side, that is the wearer's left, I added the knob side. This time, I could sew in the facing with one straight seam. I then slipped the knob side between the facing and the front panel, lined everything up, and marked where the knobs needed to poke through the fabric to meet up with the loops. I then poked little holes int he fabric and pushed the knobs through. Again, I hand-sewed the piece in place so it wouldn't move up and down or side-to-side. 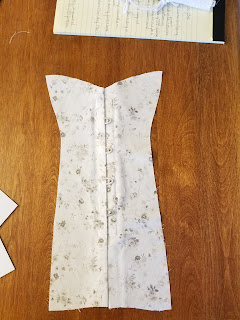 And then, diSASter. I spilled water all over my directions. Okay, so that's not much of a disaster. It was fine, but still. Oops. 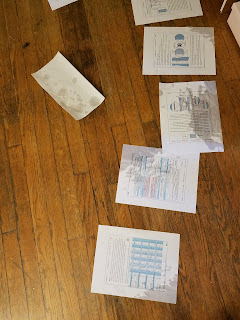 The back panels came next. Alas, I didn't really get pictures of the process, but there isn't a whole lot to tell. I marked out where all the holes should go (many thanks to the handy-dandy diagram included in the pattern), poked holes as small as possible through the fabric for the eyelets to pass through, and put in the eyelets. This involved the eyelets themselves, an eyelet-setting tool, and a hammer. The hardest part was pushing the eyelets through the tiny holes, trying to keep as much of the fabric's integrity as I could. It made the tips of my fingers sore for a day or so.

With the eyelets in, I sewed together all the panels, which was maybe the least time-consuming part of the project. Then I put in the lacing. You'll notice the bow partway down. That's actually at the waist (this is an under-bust corset), and that's how you tighten it. You loosen the lacing, fasten the busk in front, give the laces a pull to tighten appropriately, and tie off the laces. 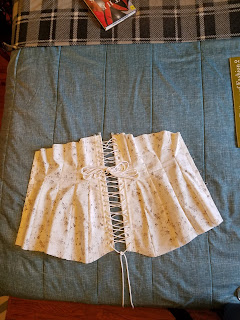 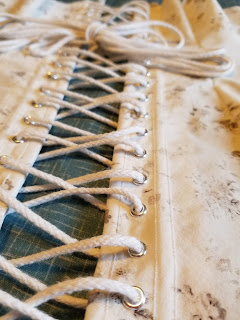 Again, I didn't get many good pictures, but there were still a number of steps left. I trimmed down the seam allowances and sewed in the boning channels. (I bought pre-made boning tape--not cheap, but saved me oodles of time. It's simple enough to make--it's just flattened tubes of fabric--but it's time-consuming.) I hand-sewed the center of each boning channel very precisely in place about 1/16" away from each seam towards the back of the corset. I did it by hand so I could make sure they all sat just right. It took about a day's worth of hand-sewing to do that, because every single stitch had to be carefully placed from both sides. Luckily, with that done so carefully, I was able to machine sew the two sides of each channel without much trouble, and that was a fairly quick process.

I took a bit of a break to visit Mount Vernon on Monday (Presidents Day), then came back to trim down all my "bones" (plastic zip ties), place them, sew them in at top and bottom, secure the waist stay (twill tape running around the waist beneath the boning channels), and then sew binding to the top and bottom (using purple thread, because purple). And it was . . . done! 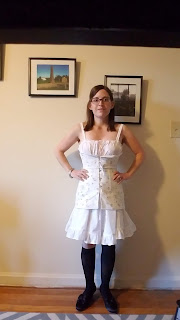 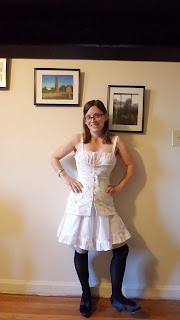 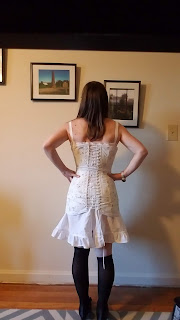 Overall, I love it, and I'm really proud of the work I did here.

A few things to note. First, I had been a bit concerned about the weight of the fabric I chose. It seemed like the whole thing might end up being too flimsy. But with the boning channels in and the binding around the top and bottom, it felt much more secure, and I'm really pleased with the fabric choice.

Second, the pattern calls for lace around the bust, but I didn't add that. I like it just fine as it is.

Third, you'll notice the lacing isn't entirely even in the back. I think this is partially imperfect tightening technique--I think the space is there to pull tight where I need to pull tight. In spite of my best efforts, the fit might also not be perfect, but, hey, it's not bad for my first corset, methinks. You can see here that I pulled the lacing loops at the waist around to the front to tie it off. Trying to tie it at the back was difficult and awkward, and I just couldn't make the knot stay put. This method works just fine. Also worth noting: tightening the corset thusly took 1" off my waist.

Fourth, I successfully solved that gap at the center front from the mock-up, so I'm pretty pleased about that.

Fifth, this pattern also calls for garters, which attach the bottom of the corset to the stockings with a clip. However, I haven't added those yet. It should be a fairly easy thing to add sometime soon.

Posted by Elizabeth Huhn at 8:16 AM