It's been a weird few days--okay, let's be real, it's been a weird few months, with COVID and all. But the point is, I meant to blog about this several days ago and...didn't. In my defense, I did get a lot of sewing done and watched Harry Potter and the Deathly Hallows Part 2 during that time. Which...isn't much of a defense now that I think about it.

I shouldn't be so flippant. The occasion for this blog post is a sad one.

The pictures below are of Michael Llewelyn Davies. He was the fourth of the five brothers who helped inspire Peter Pan. He wasn't even born in 1897 when his eldest brother George met writer J.M. Barrie in Kensington Gardens and the two became friends. Michael was born in 1900, and he was only four years old when Peter Pan premiered. George was the original model for Peter Pan, and Peter gave him his name, but Michael had no small part in inspiring the writing of the play. George was still very much a favorite of Barrie's, but Michael became a favorite among the brothers, too, maybe the favorite.

Here is a picture of Michael, dressed up as Peter Pan in a costume given to him by J.M. Barrie: 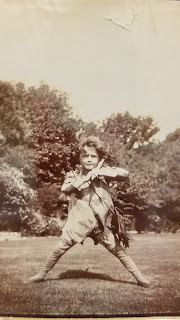 And here's Michael a bit older, kitted out to go fishing--which was a favorite activity for the Llewelyn Davies brothers, and which J.M. Barrie encouraged. By the time this photo was taken, both the boys' parents had passed away from cancer. Barrie was acting as guardian, alongside their longtime nurse Mary Hodgson.

Michael was a sensitive child, and the loss of his parents affected him pretty deeply. He had terrible nightmares and had trouble adjusting to Eton at first. But he was extremely bright and talented, both in art and poetry (for the record, his grandfather was an artist and novelist, and his first cousin was novelist Daphne du Maurier, so J.M. Barrie's wasn't the only literary influence in his life). He was athletic, too, making the first elevens at cricket at Eton. 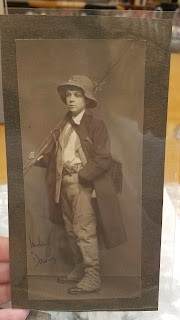 This last picture is Michael in 1919, at Oxford. There was some back-and-forth between Michael and Barrie over Michael's future. Michael had thoughts of studying at the Sorbonne and being an artist in Paris, but Barrie preferred he go to Oxford. Michael actually left Oxford briefly but went back.

It was while he was studying at Oxford that he and a friend, Rupert Buxton, went down from Oxford on May 19, 1921, to Sandford Lasher along the Thames. A lasher is the pool beneath a dam, and this was a place where students sometimes went to swim. Unfortunately, on that day, something happened, and Michael and Rupert were drowned. They were both far too young to die, and it was a devastating blow for Barrie (especially since they had lost George during the war).

Exactly what happened that day isn't clear. I have my own theories, and I could go on and on about this topic, and maybe I will do so later. Many people suspect it was a double suicide, or at least a suicide on the part of Michael--that is, the two young men committed suicide together (the theory is usually that they were homosexual and were distressed by what that might mean in that time and place), or Michael committed suicide (for whatever the reason) and Rupert tried but failed to save him. The official inquest returned a finding of accidental death, however. I tend to believe it was accidental. It was well-known that Michael couldn't swim and was terrified of the water. He might have gotten into some difficulty while swimming, and when Rupert tried to help, Michael, in his desperation, took them both down (this is not unusual in drowning situations). But of course, we'll never know what went on in the heads of either young man.

But it was 99 years ago this past week that Michael Llewelyn Davies passed away. So I wanted to mark the anniversary. Well, roughly. 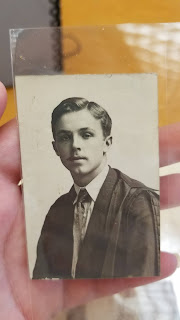 Posted by Elizabeth Huhn at 5:31 PM