Yep, I'd say this blog has shifted pretty thoroughly to costuming stuff, at least for now. I'm fine with that. I'm a little backed up as far as the costume posts--I've been busily sewing but not blogging about it.

At the same time I was working on my yellow '20s dress, I worked on a bonnet to match my new blue 1860s dress. I already had a bonnet, but: 1. it was white, tan, and yellow, which absolutely did not match with the blue-white-and-red dress, 2. it was not all that well-made, 3. I made that one in crappy polyester (a mistake), and I wanted to make one with real silk, and 4. I just wanted to.

Structure: about half of 1 yard of buckram I bought from Timely Tresses for $11.

Wire: got some 18 gauge wire from Home Depot. You're supposed to use millinery wire, but this worked beautifully. About $4.

I had made this pattern before, so I knew the general idea. Although I love everything I got from Timely Tresses, the directions can be confusing for a first-timer, and when I first made this bonnet, I made mistakes, especially in wiring it. But this time I was more careful.

The first step was to trace out the pieces--the tip (or back), headpiece, brim, and bavolet--onto the buckram and then cut them out. Nothing special there. The next step was wiring the edges. This entailed butting the wire against all the edges, taping it on temporarily, and then blanket-stitching it all around. Everything on the bonnet is hand-stitched, and I'm slow with hand-stitching, which is why this project took me a while to complete. 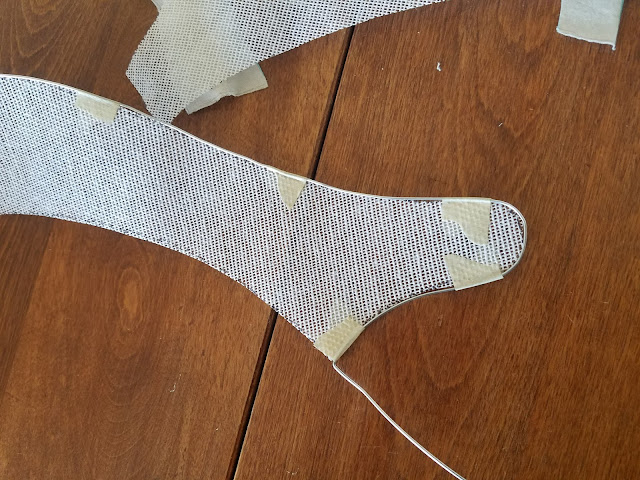 While I was at it, I had to create a bowl-shaped tip for the back of the bonnet. In the picture above, it's just to the left of the tea cup. To make this shape, I cut a circle out of the buckram and tried to use steam to form it over a cannoli container (that's what's sitting beside the tip in the picture above). I had gotten myself pizza and a cannoli for dinner a night or two earlier and held onto the little plastic container the cannoli came in. I was trying to figure out how to form the tip and thought of this container, which magically was just the right size and shape. I used that and a cereal bowl to help shape the tip.

I did run into some trouble. In my infinite wisdom (ha), I thought I should spray starch all over the tip to . . . make it stiffer, I guess? I'm not sure what my thought process was. But it got wet with the spray starch and went limp, and I was pretty sure I'd ruined it, because it was just like a wet piece of netting and it needed to be stiff. I shaped it with my bowl and cannoli container and used a hairdryer to dry it. Look, no one said the making of these pretty things was glamorous. My unorthodox methods worked, the buckram dried and stiffened, and I had a tip. It ended up having folds in odd places and not being quite as nicely shaped as I would've liked, but it worked perfectly fine for my purposes.

In any case, with that minor crisis overcome, it was on to binding the edges of the pieces. I cut bias strips out of an old muslin mock-up and wrapped them around the edges, then did a running stitch to secure them. Easy. Somewhat time-consuming, but easy.

The next step was to butt all the edges against one another and whip-stitch them together. The wire tail from the brim stuck out long enough to wrap around the bottom of the bavolet (the back flap) and give it structure.

Next, it was time to chalk the pattern onto the fabric... 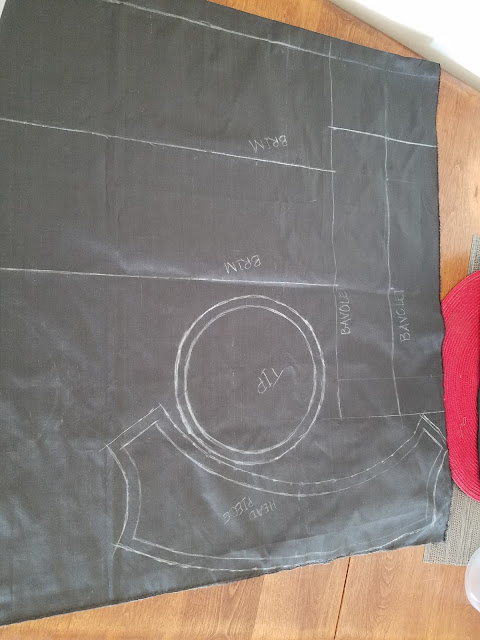 ...and then cut those pieces out and hand-stitch them down. I sewed the tip on first. I had to do tiny pleats to make it fit, and there was some fiddling to make it as even as possible. But then I just did a running stitch to secure it. I did the headpiece next, sewing the center back seam first, then fitting it over the form. I turned under the back edge and slip-stitched it to the silk tip (that is, I didn't secure it to the buckram form, just to the silk, which was secured to the form).

Then I did the brim. This is a long rectangle, gathered down. I had some trouble with this, so to help get the gathers even, I actually sewed my gathering stitches on a curve, rather then right along the edge of the fabric. At the tips, I just tucked the excess fabric in and sewed it down. Along the edge with the headpiece, I turned under the brim fabric and slip-stitched it to the headpiece fabric. I think I did this out of order and that it might have been easier to do the brim first, then the headpiece, but whatever.

Finally came the bavolet, the frill on the back. This is just a long rectangle gathered and sewn to the back of the bonnet (with more slip stitches). I did make a mistake here--I didn't make it long enough, and I'm slightly dissatisfied with that part of the bonnet. I had to go back and wrap the white buckram bavolet in black silk so it wasn't so visible, which wouldn't have been a problem with a longer bavolet.

The next step was, of course, to decorate my bonnet with my ribbon and flowers and some netting on the inside of the brim. This was all totally straightforward. I took a length of the netting (which was left over from my first bonnet) and gathered it to fit inside the brim, then stitched it in place. I fiddled around with the ribbon and flowers until I had an arrangement I liked. No science to it, and very little art, but I'm pretty pleased with how it turn out. 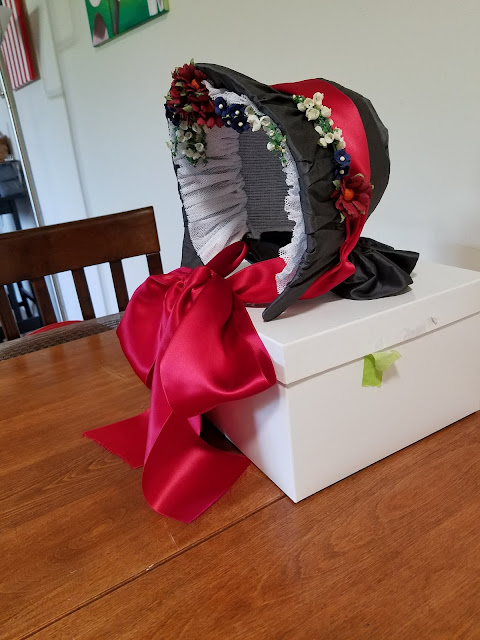 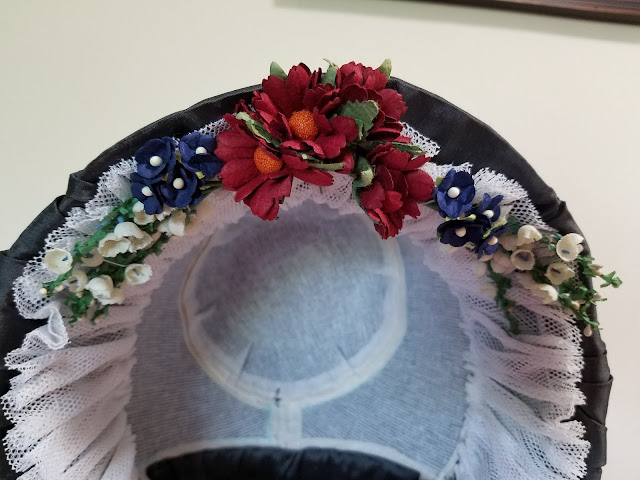 WHAT I COULD HAVE DONE BETTER

Overall, I was really, really pleased with this bonnet, so I wouldn't do too much differently. But I would have perhaps added a layer of fabric between the buckram and the silk, just to soften the look. This probably isn't necessary, so I'm not too upset about not doing that.

I also didn't line the inside of the bonnet. This is something I really should do and might do in the future. It would help with getting it on and off without messing up my hair.

Oh, and I should have made the bavolet about an inch or two longer, as mentioned.

Posted by Elizabeth Huhn at 3:33 PM