...And George Llewelyn Davies at Cambridge

At the end of last year (oh Lord, that seems like a bloody age ago, doesn't it?), I went on a trip (fancy getting on a train and going somewhere!) to New Haven, CT (God, I miss traveling).

Why might I have gone to New Haven? Well, because New Haven is the home of Yale University, and Yale is home to the papers of J.M. Barrie and the Llewelyn Davies family. To catch up anyone who might not be aware, I became deeply fascinated with the story of the Llewelyn Davies brothers, who inspired Peter Pan, about two and a half years ago now. I wrote a novel about them. And then I decided to go to New Haven to see the papers. That seems backwards, but I had access to most the info in those papers via a fabulous book by Andrew Birkin: J.M. Barrie and the Lost Boys. Much of the photos and letters are also available via jmbarrie.co.uk, and a lot of it is digitized by Yale (e.g.: The Boy Castaways of Black Lake Island). Besides, I didn't realize the papers were there at Yale until after I finished the ms.

In any case, in going to Yale to actually see the collection (at the Beinecke Rare Manuscripts Library), I was able to hold in my hands the actual letters that I had read copies of, including George's and Peter's letters home from the trenches of WWI. I was also thoroughly delighted when I came across this spectacular photo of George: 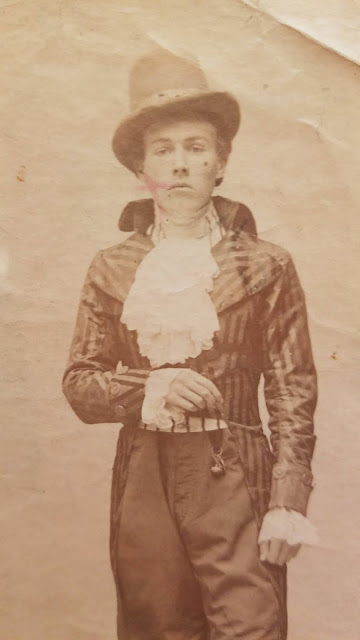 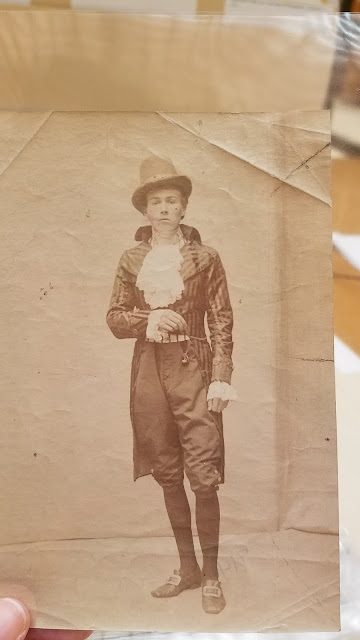 Does dear George not look fabulous? It's clearly a costume (this is not standard 1910s men's garb, obviously). It's part of a group of photos of him in costume, sometimes with fellow actors posing as if taking part in a scene. George was in the Amateur Dramatic Club at Cambridge, which is where these photos come from. Being the unofficially-adopted son of a famous playright and the real inspiration behind one of the stage's most beloved characters (that is, Peter Pan), acting was surely in his DNA.

The costume is from a time that was bygone even in 1914, when this was taken. I have an iota of knowledge about historical dress, and I pinned this to the 1790s or early 1800s. I was only about 80% sure of my guess, but this costume is pretty amazing in its detail and, frankly, accuracy. It seems quite extravagant, too. One wonders--well, I wonder--whether Barrie provided financial backing to the ADC. In any case, a friend on Facebook confirmed that it looked very 1790s.

Today, I was browsing through jmbarrie.co.uk (for funsies) and realized that this photo was online there (I don't think it was previously) and that it was labelled as being from 1914 and from a production of A Tale of Two Cities (which takes place partly during the 1790s).

It's delightful to be validated in my placing of the costume's time period. It's also fantastic to know exactly what play it was from. It also hurts more than a little to know that this was taken just a few months before war broke out--a war that killed George the following year. But mostly I was just pleased to have a little more knowledge about this story.

Posted by Elizabeth Huhn at 9:13 AM