Introduction
Over recent weeks, I made a few Victorian underthings: a mid-Victorian corset, a mid-Victorian chemise, and a late Victorian/Edwardian petticoat.
Why?
I made the corset because the corset I had was fine but wasn't very historically accurate, didn't give me quite the hourglass shape I wanted, and was too long at the sides so that it pressed on my hip bones. Also, the pattern for a new corset was on sale.
I made the chemise because, again, I wasn't happy with the shape of the chemises I had, and I wasn't going to go to the trouble of making a better corset only to wear it over a chemise that looked wrong. Yes, I know that when the whole look is put together, no one will see the chemise, but this is the 21st century and sometimes we take pics in our Victorian "undies" (which are less revealing than most modern outfits).
Finally, I made the petticoat because the dress I'm working on currently definitely made it necessary. It's made of sheer chiffon, so I needed something to go under the skirt.
I should add, these were stash-busting projects for the most part, meaning I used mostly stuff I already had on hand.
The Specs:
Corset:
Pattern: Redthreaded 1860s gored corset (redthreaded.com)
Fabric: Single layer of heavy white twill (about 1/2 a yard)
Hardware: Grommets for back lacing, 11" busk for front closure, zip ties for the boning, twill tape, bone casing, and cording to lace it.
Chemise:
Pattern: Started with Truly Victorian Chemise and Drawers (TV102)
Fabric: White cotton lawn (about 1 yard)
Petticoat:
Pattern: Started with Truly Victorian Late Edwardian Petticoat (TVE14)
Fabric: White Cotton lawn (about 1 yard) and some lace (about 1.5 yards)
Making the corset:
My first corset was a 1910s long-line corset (my Rilla corset--see my blog here), and it went really well, so I embarked on an 1860s corset with optimism. I ordered my supplies (I needed a busk and cording) and made a mock-up in the meantime. I had purchased the medium size pattern based on my bust size (I possibly should have gone smaller, given what happened later, but, well, you'll see). I made a mock-up of muslin, taped on zip ties, and attached a 2" strip of fabric in the back to mimic the lacing gap. This meant I didn't have to fiddle around with a lacing panel, holes, and lacing. I put it on and was pretty pleased. It fit pretty well in the torso, the hip gores hit in a good spot, and the bust gores seemed fine. I noticed the side seam was too far back. Instead of being right at my side under my arm, it was along my back.
And then I realized I hadn't added the lacing panels, which would add another inch-and-a-half or so on either side.
Well, damn. My solution to the corset being too big around was to kill two proverbial birds with one stone: I lopped an inch off the side of the front panels, which took 2" total out of the circumference of the corset and moved the side seam forward. To take even more out of the circumference, I tightened up the seam allowances in the lacing panels. By taking these bits away, I compensated for the addition of the lacing panels, and it ended up fitting well, like it did when it had no lacing panels.
Honestly, it still is probably a little too big all the way around. When I lace it shut, the gap at the back is barely 2", which is basically the minimum. On the upside, the lacing gap is even all the way down. On the downside, I can't tight lace, but I wasn't going to do that anyway. 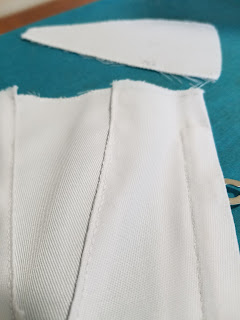 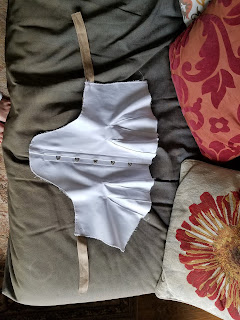 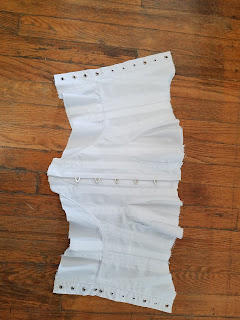 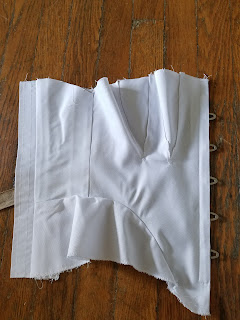 Anyway, those changes were really pretty simple to make. and I was really happy with this pattern and how it went together. I started in on the final product, that is with the twill. I did only a single layer because it's easier and it's cooler to wear, and I'm quite happy with a white corset. Fancy colors are fancy, but . . . fancy isn't totally necessary. I inserted the busk, sewed together the panels and gores, constructed the lacing panels, sewed in the boning channels, and added the bones. Then I bound it around the top and bottom and added the lacing. And it was done.
I was pleased with the final product. It's a bit big in the hips, so the proportions look odd. It could/should be padded to create the proper silhouette, but then again, it will be under a hoop skirt and not visible, so why? The bust is a bit gappy along the top edge, but apparently it's a Thing to have a little drawstring at the top of the bust, which I might actually do. That or sew in tiny darts. Or add padding. Oh, and I had trouble with the grommets. A few popped out. So I need to sew those. Okay, so a bit of work still needs to take place here, but not much, and it's really fine as-is.
Making the chemise:
For this piece, I started with a Truly Victorian pattern which was, in fact, the very first thing I ever sewed (aside from a really, really simple dress for the Ren Faire in middle school lo these many years ago). That chemise has served me well, but the fabric is a bit stiff, and the shape is . . . not what I was looking for. I was looking for a wider, scoop-ier neckline. I also wanted to finish everything off nicely.
So I got to work. I wish I could describe what I did. It involved measuring the width of my shoulders and the depth I wanted the neckline to scoop, and doing some math and guessing and head-scratching. I penciled something I hoped was correct onto the original pattern. I could've done a mock-up, but I frankly didn't want to use up the fabric and time. So I traced my new pattern directly onto my cotton lawn and cut it out with a whole lot of seam allowance all around.
I then draped the result onto my dress form, and, whoo boy, it's good I left lots of seam allowance. The outer edges of the front and back shoulder seams just barely met. I did a bit more adjusting, but I was basically happy with the result. All of this fiddling and cutting took most of a day.
The next day I started sewing, and I didn't stop until I was done. I decided the neckline was right where I wanted it, so I bound it with double-folded strips of bias-cut fabric. I had never actually tried this technique, and it turned out beautifully. I did the same thing with the arm holes. The side seams I folded and then machine-stitched down (no hand felling for me; I'm not Bernadette Banner, ffs). In addition to binding, I wanted to try pin tucks. It was getting a little late in the day, but I was determined to finish this thing, so I added three pin tucks along the bottom, which really go a long way in making it look VICTORIAN.
I might add a bit of lace around the neckline to soften it and make it, well, lacier. Otherwise, this thing is LEGIT and it is DONE.
Making the petticoat:
This, like the chemise, was somewhat ad hoc. I started with the late Edwardian petticoat pattern from Truly Victorian. What I needed was a fairly plain skirt that didn't add much volume or shape.
However, quite fortuitously, I found this image of a petticoat from about the time period I needed my petticoat for (1919--and yes, I'm aware that that is *not* Victorian; I'm stretching it a bit/a lot, but the resulting petticoat can, I think, work for a variety of styles).

If you notice, this shows quite a bit of gathering at the waistband. The TV pattern calls for a bit of gathering at the back but is otherwise quite fitted. The TV pattern also shows a slightly different configuration of front, back, and side panels. My first step was to ignore the back panel; I would just cut two of the front panel. Then I went up several sizes. For the front panel, I drew a straight line from the "attach dust ruffle here" line to the very top corner of the waist line. This was now my fold line, thereby doubling the width of the panel after going up several sizes. For the front panel (which would be the pattern for both the front and the back), I just went up several sizes. All of this fiddling preserved the lines where the pattern pieces met, so I wouldn't have to worry about making curves meet neatly and so forth.
Anyway, with all that figured out and a lot of volume added to this petticoat, I went ahead and cut it out of my cotton lawn, then sewed together the four panels. I was pretty pleased with the volume. I ran some gathering stitches. It was again getting late in the day, and I might have forged on, but partway through running a line of gathering stitches, my bobbin ran out of thread, which was a sign from the sewing gods to give it up for the night. I came back to it, finished the gathering stitches, cut out a waistband, turned in the edges, gathered the skirt to the waistband, turned it out, folded the waistband over the top of the skirt panels, and stitched it down using a machine top stitch because I was too lazy to do it by hand when it really would never be seen.
I tried a drawstring as a closure but it didn't quite work, so I sewed on a hook-and-bar closure, and it worked perfectly. I hemmed the bottom, and it was magically almost the exact right length to go under the dress I made it for. For pizazz, I added some lace that I bought as part of a lot on Ebay. It was a perfect addition. Finally, I ran some light pink ribbon through the holes in the top of the lace.
Posted by Elizabeth Huhn at 6:28 PM No comments: