I recall, somewhat vaguely, hearing about "Godey's Lady's Book" in my AP US History class in high school, lo these many years ago. If I remember, it was mentioned in the textbook, one of those bolded words you're meant to take note of. Apparently, I did take note of it.

Godey's Lady's Book was a monthly lady's magazine out of Philadelphia, begun in the 1830s. Magazines at this period were very popular and included all kinds of information and features. It was something of a catch-all resource for women, with short stories, poetry, literary notices (that is, notices of books about to be published), "receipts" (what we now call recipes), architectural plans, music, tips for pressing flowers, drawing tutorials, embroidery designs, all the latest fashion "chit-chat", and full-color fashion plates.

All of which is to say that I was familiar with Godey's Lady's Book when my father's cousin contacted me to say he had a volume of the magazine. I was interested and mildly enthusiastic. On a day when I had another package go awry in strange circumstances, I got the package containing this volume. When I got it, I was preoccupied with that other package.

And when I opened it, I became more than mildly enthusiastic. I was thrilled.

This was a volume of all twelve monthly issues of Godey's Lady's Book from 1864. A whole year's worth! This volume, according to my father's cousin, had come down through the family (he suggested it had come with the family out to Kansas in the 1850s, but of course that isn't possible since the volume was of 1864 issues). It isn't in very good shape. There is no cover, the first few pages are torn and detached, and the binding it starting to fall apart. In fact, I sat down and immediately engrossed myself in it, flipping through the pages, and I went through it again a few days ago taking pictures of anything that might be of interest, but I will do my best not to open it again. Just going through it twice caused more cracks in the binding and therefore caused more sections to come loose from the rest of the volume.

Going through it that first time, I was delighted. I didn't read any of the stories, but I did glance at some of the poems, which were, I'm afraid, pretty maudlin Victorian fare, focused on death (not a big surprise in 1864, right in the middle of the war). I can't really read music, so I skimmed that. I didn't want to sit down and read the many stories and serials, either. But I was very interested in the various fashion items.

These fashion items came in various forms. There were the gorgeous, full-color fashion plates, of course. These were double the width of the magazine, were a "landscape" orientation, and folded in half fit into the magazine--you know, fold-outs. Sadly, over the last 157 years, some of the fashion plates went missing, lost the half of themselves that once folded out, or were torn along the fold. None were entirely intact. But what did survive is pretty glorious: 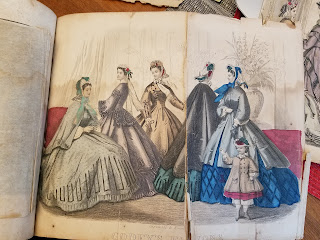 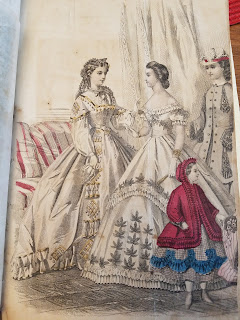 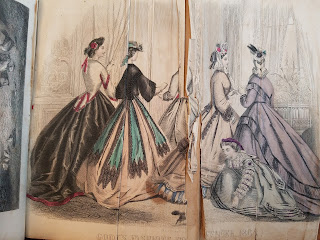 (This is just a sampling. About half to two-thirds of the fashion plates survive, reckoning in the plates that are half-missing.)

Aside from this, there was a sections called "novelties", with etchings of various items of clothing, sometimes for children and sometimes accessories. There were images of bonnets and caps and undersleeves and what I would call chemisettes: 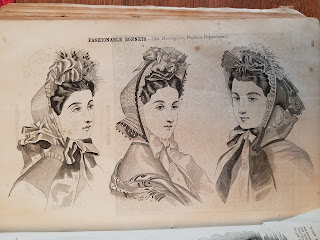 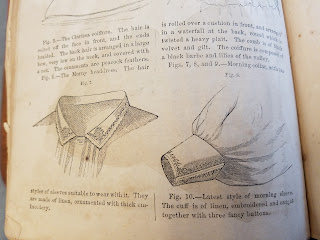 There were also line etchings of outfits, ensembles, hair decorations, and coiffures: 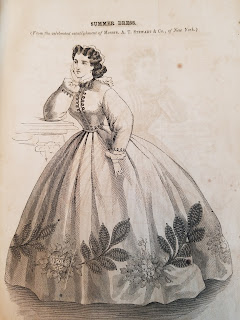 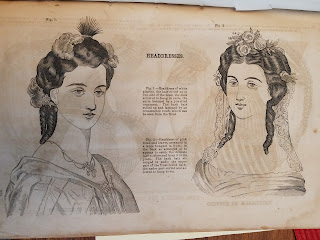 I particularly enjoyed this etching of bathing costumes: 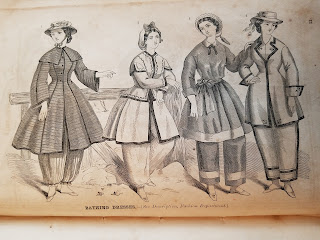 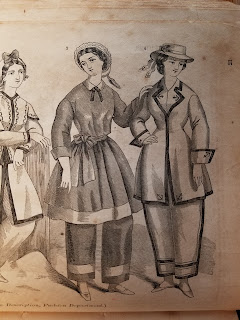 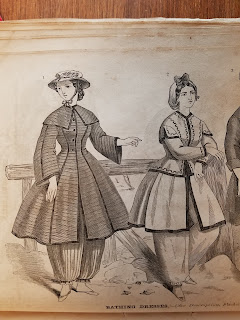 There was, alas, only one pattern diagram, but I quite like the bodice it supposedly makes: 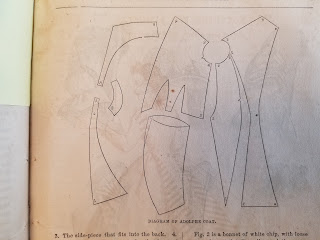 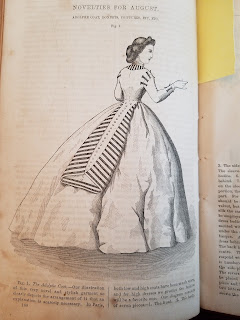 Now, if you've seen any other part of my blog, it's pretty evident that I'm into costuming. I've been trying hard to up my game recently as far as accuracy. I've been less than satisfied with what I've sewn, though I'm getting closer as I learn. How better to make an accurate ensemble than to base it on the information in Godey's Lady's Book? This volume can show me the cut and silhouette of dresses, but it also has information about accessories and styling and how everything went together as a look. The hair stuff would be helpful if I weren't so utterly useless when it comes to hair. That is a weak point of mine and is oh-so-important in getting the right look. I'm working on it.

In any case, I am extremely grateful to my father's cousin for sending this to me.

Posted by Elizabeth Huhn at 4:07 PM